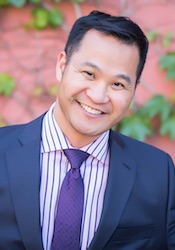 Romben Aquino has been a lawyer for over a decade.

When I graduated from law school, I did not have plans to become an immigration lawyer. To be honest, I thought that if I practiced immigration, I would end up doing a lot of my mom’s relatives’ petitions in exchange for lumpia.

I have been doing immigration exclusively since 2005. I stumbled into my first immigration job as a result of a number of happy coincidences. A friend of mine forwarded me a job listing that she received from her law school classmate, who was trying to help out alums of his law school. So, when I showed up at the interview, one of the questions was “Hmmm, we were expecting a bunch of New York Law School grads, how did you get here?” I guess my answer didn’t blow them away; I didn’t get the job. They chose someone who went to NYLS after all. About a month later, though, I got a call from the firm: “Hey, um, it didn’t work out with the other lawyer. You still available?”

During that stint in New York City, I learned immigration law by sitting at my boss's elbow. I shadowed him in immigration court and I observed his skill in court. Ed didn't really like to write briefs and motions, so those tended to land on my desk. Turns out that writing briefs, motions, and appeals is an effective way of learning substantive immigration law. After about a year of observation, he sent me to my first court hearing by myself. When I initially panicked, he said something like "If you haven't learned anything after watching me for a year, we're in a heap of trouble."

I have had the same mentor for over twenty years. He inscribed this story in a book he gave me for my college graduation:

One day, I was walking down the beach just before dawn. In the distance, I saw an old man picking up stranded starfish and throwing them back into the sea. As I approached the old man, I asked, “What are you doing?” The old man explained that the stranded starfish would die if left in the morning sun. And I exclaimed, “But there must be thousands of starfish. How can you possibly make any difference?” The old man picked up a starfish next to my feet and as he threw it to safety in the sea, he said, “I just made a difference to that one!”

That mentor, by the way, happens to be the Fong in Fong & Aquino. (We go way way back.)

There are many unhappy lawyers, but I am one of the lucky ones. I have found a field of law that I enjoy, and I love my clients. I like to think that I am the old man — helping make a difference to the thousands and thousands of immigrants in Los Angeles, one at a time. But I realize that it has been my clients who have touched me. It is they who have chosen me to entrust with their futures, their children’s futures.

I live in Hacienda Heights with my beautiful wife, two wonderful kids, and a Jack Russell terrier / chihuahua mix.

Oh, the funny thing about my mom: she is one of my top five sources of client referrals. So, whether my mom sent you or you got here through a series of happy coincidences, I’d love to hear about your future in the United States and how I can be a part of it.